A resolution calling on Exxon to report on risks posed by climate change was hailed as a “game changer” last year after shareholders got behind it. However Exxon’s 2-degree Celsius scenario report (named for the Paris Agreement target to limit global warming) was deaf to the imperative of quickly transitioning away from fossil fuels. The report raises a critical question for climate AGM activists: Why continue to table 2-degree scenario resolutions—23 this year—rather than resolutions seeking transition plans? Why pursue analysis of risk when what is needed is an overhaul of a 20th Century fossil-fuel-based, risk-laden business model? Why bring a knife to a gunfight?

A Preventable Surprises analysis of 2-degree scenario (2DS) resolutions in the utility sector—which is rife with opportunities to transition away from carbon—shows the futility of an incremental approach. Over the past five years, shareholders have filed 86 resolutions at utilities seeking emissions reductions or disclosure of climate risk; 33 were withdrawn after companies engaged with the filers. But no public accounting exists of the commitments companies have made in exchange for those 33 withdrawals—or whether the commitments were met.

Last year, ten 2DS resolutions were filed at utilities, getting a very high average vote of 45%—although the largest investors in the sector, BlackRock and Vanguard, opposed all of them, according to our research. This year, filers have withdrawn most of the 11 utility resolutions as companies agreed to create 2DS plans. Is this a game changer? Are we winning the war on emissions? Or are utilities–masters of the art of predatory delay–taking a page from Exxon’s playbook?

Atlanta-based Southern Company, a regulated utility serving more than 9 million customers, shows why the 2DS strategy is not fit for purpose on an overheating planet. Shareholders have filed 10 resolutions on 2-degree scenarios or emissions targets at Southern over the past 10 years (see chart below for details). Filers As You Sow and the New York State Comptroller withdrew four of them between 2011-2017. After last year’s 2DS resolution nearly passed, Southern published a 2DS plan in April. On its surface, the plan is promising: “We are setting a long-term goal of low- to no-carbon operations by 2050,” with an interim goal of a 50% reduction in C02 emissions from 2007 levels by 2030. However Southern’s plan doesn’t make clear how the reductions will be achieved.

Its strategies include converting coal plants to natural gas; adding nuclear capacity; increasing renewables; and carbon capture and storage. One diagram shows that natural gas has increased from 16% of generation capacity in 2007 to 47% a decade later. Over the same period, “renewables/other” grew from 1% to 10%, with no explanation of “other.” A second diagram shows solar making up 22% of Southern’s “carbon-free and carbon neutral energy sources,” however those sources were only one-quarter of Southern’s total capacity in 2017. The solar figure appears to include 100% capacity at out-of-territory facilities where Southern’s merchant subsidiary is a 51% owner. It doesn’t mention that the subsidiary is selling a one-third stake in its solar assets.

In short, the 2DS plan reads like a marketing brochure justifying existing investments and strategies. For years, Preventable Surprises has encouraged filers to put forward transition plan resolutions using science-based targets rather than scenario plans. Filers assure us that the more-robust transition plans are the logical outcome of 2DS plans. Two problems: our ecosystem doesn’t have another decade for companies like Southern to see the light on solar and wind. And, two, the file-withdraw-file-withdraw treadmill hasn’t changed a culture that clings to incentives that penalize renewable energy in many states.

Southern’s subsidiaries serve ratepayers in Georgia, Mississippi, Alabama, and Florida—all very sunny places. Yet Southern owns only 407 megawatts of solar in its service territory, according to its 10-K. Southern has total generating capacity of 46,100 megawatts. A competitor, Florida Power & Light, had 0.97% solar in its power generation portfolio in 2017, according to its SEC 10-K filing.

Why do these utilities prefer fossil fuel-powered plants and nuclear facilities to solar? Because they cost more. As a regulated utility, Southern is guaranteed a percentage return on its rate base—the portfolio of generation, transmission and distribution assets it builds and operates. The grander the project, the greater the profit. With a free fuel source, solar power is at a disadvantage. Too much solar power reduces the need for expensive coal- and gas-fired plants. As European utilities discovered, this leads to shuttering expensive, even fairly new, coal- and gas-fired facilities. As if to underscore this point, a Southern subsidiary owns 1,400 MW of solar capacity in Texas, California, and Nevada. Cheaper power generated in these three deregulated states will not compete with Southern’s facilities.

The inverted logic of regulated utilities has borne strange fruit. Southern spent $7.5 billion on a coal gasification plant in Mississippi (plus $380 million in federal grants) before it became clear that “clean coal” was as oxymoronic as it sounds. Southern will also spend an estimated $25 billion adding two nuclear reactors to the two it already operates in Georgia. The new units, where Southern has a 45% stake, aren’t expected to open until 2021, five years behind schedule, at twice the original projected cost. The risk of these massive projects is primarily born by investors and some of the poorest ratepayers in the country.

Where are the correctives to this madness? For decades, congress has blocked emission controls. State regulators are captive to industry narratives about resilience and reliability—narratives adopted by the Trump White House. Income-hungry investors have been more interested in utilities’ rich dividends than in Paris Agreement goals. Captive ratepayers have no choice.

Into this lacuna have marched activist shareholders who have won battles at Exxon and Southern but are losing the war. This chart shows what 10 years of engagement at Southern looks like. 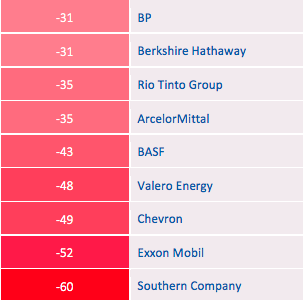 In short, climate campaigners have brought a knife to a gunfight, which isn’t going to change the game being played by utilities in regulated markets.

Ms. Aspin is the author of The Missing 55%, Preventable Surprises’ analysis of the proxy voting records of the 10 largest utility investors. Preventable Surprises encourages asset managers to view climate change as a systemic market risk that requires active engagement with laggard companies.