When the Philadelphia Eagles won the Superbowl–after a 57-year drought–the outpouring of joy was magnified by the pride many felt in the “wokest team in the NFL.” The Eagles had one playbook for grid patterns and another for tackling racism in policing and the criminal justice system.

They ignored the demands that they “stick to the sport” and instead met with prisoners, police, and politicians. They used their muscle for more than advancing a ball down a field; they lobbied for sentencing reform at the state and federal level. Not satisfied with the limits of a single team, they formed a coalition across NFL teams that convinced team owners to contribute $89 million to social justice causes.

Are there lessons here for the investment community? U.S. investors have not teamed up to tackle climate change — the greatest risk facing financial markets, according to the 2006 Stern Review, the Financial Stability Board’s task force report on climate risk, and the 1,000 business leaders surveyed by the World Economic Forum for its 2018 Global Risk Report. It is alarming to see the players with the biggest muscle sit out the match of the millennium, even as other countries take the ball and run with it.

The ClimateAction100+ initiative, announced in December, is the most woke effort so far, bringing together 256 investors with $30 trillion in assets under management. They are asking the companies in which they invest to “take action to reduce greenhouse gas emissions across their value chain, consistent with the Paris Agreement’s goal of limiting global average temperature increase to well below 2-degrees Celsius above pre-industrial levels.” Pension funds–whose beneficiaries have a distant horizon–dominate the list of signatories. Among investment firms, the U.S. is noticeable by its absence, leaving the field to European firms.

Of the 100 largest asset managers in the world (as listed by P&I/Willis Towers Watson), 43 are U.S.-headquartered and 57 are divided as the chart below shows. Only 2 of the 43 U.S. firms have signed onto ClimateAction100+, while 19 of the 57 non-U.S. companies are on board. Northern Trust and Neuberger Berman (ranked #11 and #34, respectively) are the largest U.S. firms participating in ClimateAction100+. 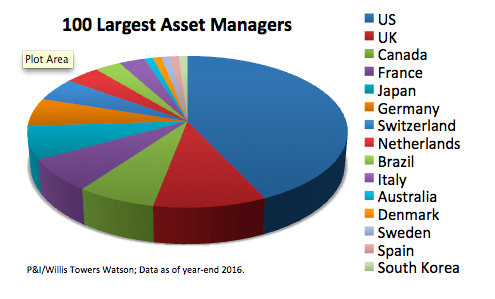 The chart below shows the home countries of the 21 largest asset managers who have signed on to ClimateAction100+. The Netherlands and France, with four signatories each, and the U.K., with three, take the most-woke honours. 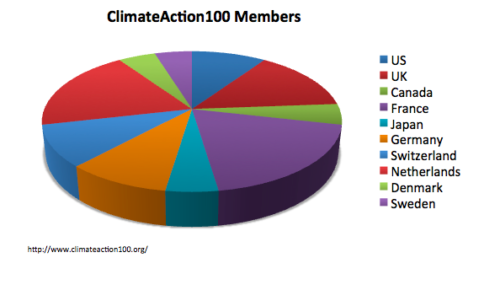 “If you’re not a climate-aware investor, you’re not doing your job,” said Brian Deese of BlackRock, the world’s largest asset manager, with $6.3 trillion under management. Deese, the Obama administration’s one-time adviser on climate change, spoke at Ceres’ biennial conference for responsible investors. While his comment suggests BlackRock is climate aware, BlackRock:

BlackRock is in good company, including its rival, The Vanguard Group. Why is it that U.S. firms find it so hard to address the risks–to their portfolios and to the planet–arising from climate change? Maybe it’s the influence of abundant domestic energy, which lowers portfolio companies’ energy bills in the near term. The Energy Information Administration has reported that U.S. crude oil production averaged 10.25 million barrels per day in the week that ended Feb. 2, a record. 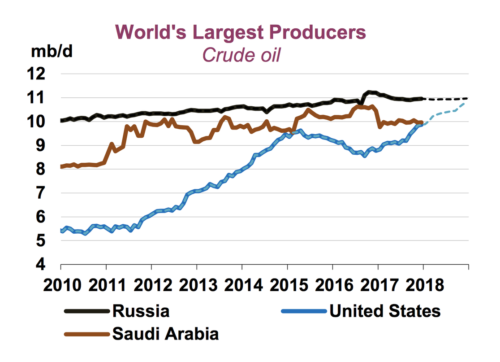 While the U.S. doubles down on its commitment to fossil fuels, Europe has spent decades encouraging development of renewable energy. In 2017, for the first time, the European Union generated more electricity from wind, solar and biomass than from coal, according to a new analysis from two think tanks. The share of electricity generation contributed by renewables was 30% in Europe, compared with 15% in the U.S., according to figures from the U.S. Energy Information Administration.

The gusher of oil and gas in America has created a complacency that investors should recognise. Lazard’s most recent levelized cost of energy (LCOE) analysis makes clear that the days are numbered for fossil fuel dominance:

“As LCOE values for alternative energy technologies continue to decline, in some scenarios the full-lifecycle costs of building and operating renewables-based projects have dropped below the operating costs alone of conventional generation technologies such as coal or nuclear.”

As if to drive the point home, the RE100 annual report shows how its growing membership–now 122 multinational companies–have turned their back on dirty power. As André Veneman, Corporate Director of Sustainability, AkzoNobel, put it:

“We’re convinced that embracing renewable energy is an excellent way to create both short- and long-term value that will enable a true business transition. RE100 is all about working with our suppliers, our customers and other leading companies to help make this change happen all over the world.”

ClimateAction100+ and RE100 are showing the way to be woke on our overheating planet. If the largest investment firms need help flexing their muscles to address the world’s greatest threat, there’s a locker room a short train ride away full of role models.