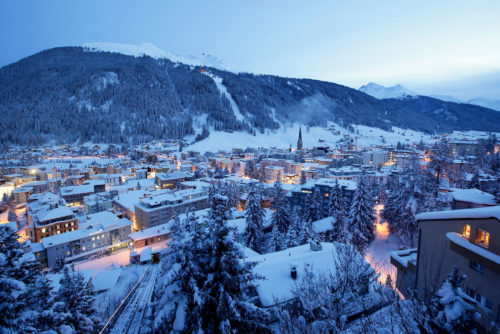 Among those rubbing elbows in Davos this week are the leaders of BlackRock, JP Morgan, and Goldman Sachs, which manage $7.4 trillion between them. The trio represents all that is wrong with the World Economic Forum’s annual event in the Swiss mountains, due to the alpine gap between optics and opportunity.

JP Morgan and Goldman Sachs are both members of RE100, global companies that are sourcing 100% clean energy for their operations. The initiative aims to scale up renewable energy to help deliver “a better, healthier and more sustainable world for what will soon be 9 billion people.”

But neither of the companies has signed on to Climate Action 100+, a coordinated effort among 225 institutional investors to force down emissions at the world’s heaviest polluters. One would think a commitment to a sustainable planet would extend to forceful stewardship at high-emissions companies in their portfolios. They aren’t alone. Of the 26 largest US investment firms, one, Northern Trust, is on board with Climate Action 100+, as our analysis has shown.

BlackRock, meanwhile, is a member of neither RE100 nor Climate Aciton 100+, however its CEO annually writes to the heads of investee companies to encourage them to take a long-term view of value creation, including sustainability issues.

The lack of joined-up thinking at these three companies is endemic among US institutional investors, who care about optics when it comes to climate but avoid opportunities for meaningful change. For example, our recent report showed the largest US investors voted against resolutions at all nine US utilities calling on them to increase transparency around climate risk and emissions. Utilities are the largest source of greenhouse gas emissions in the US–home to large reserves of coal and natural gas.

In the era of Trump and Brexit, it is clear that private actors must take the lead in pursuing the Paris Agreement to limit global warming to 2°C, particularly given the massive size of the largest asset managers relative to country GDP, as this graphic illustrates. If investment firms have any doubt about the urgency of the task they face, all they need do is read the Global Risks Report published by the World Economic Forum prior to Davos. The annual report connects the dots on climate change and systemic risk after its survey of 1,000 business leaders, which found that climate-related risks have the greatest likelihood of occurring in the next decade and they will have the greatest impact. Specifically: extreme weather events, natural disasters, failure of climate change mitigation and adaption.

We can only hope that those attending the event read the report, which ties these risks to others it identified, including cyberattacks, spread of infectious diseases, and food crises. The report notes that humanity is good at isolating and managing conventional risks. But it is less skilled at tackling “complex risks in systems characterised by feedback loops, tipping points and opaque cause-and-effect relationships that can make intervention problematic.”

Preventable Surprises was founded to address systemic risks, which we define as pervasive, non-linear, and inter-related. Our focus has been on how systemic risks are manifested within financial markets and how market actors can manage those risks. It is exciting to see the World Economic Forum connect the dots in similar fashion and encourage the search for solutions. The Global Risks Report notes signs of strain in the systems on which we rely, such as ecosystems and the global financial system. It concludes:

“We cannot discount the possibility that one or more of these systems will collapse. Just as a piece of elastic can lose its capacity to snap back to its original shape, repeated stress can lead systems—organizations, economies, societies, the environment—to lose their capacity to rebound. If we exhaust our capacities to absorb disruption and allow our systems to become brittle enough to break, it is difficult to overstate the damage that might result.”

Davos offers an opportunity for the Jamie Dimons, Lloyd Blankfeins, and Larry Finks of the world to step back from asset gathering and underwriting opportunities to ponder “the damage that might result” from ignoring climate risk. Not damage to quarterly earnings or to brand identity—but to the prospect of continued viability of life on this planet. The Global Risks Report offered sobering reading, starting with Hurricane Maria and its knock-on crises in Puerto Rico, such as serious disruption of critical infrastructure and involuntary migration. The report’s litany of climate-related disasters was dire:

• Of the 31.1 million people forced from their homes during 2016, 76% were displaced by storms and other weather-related events.
• Southern Europe, eastern and southern Africa, South America, and parts of Russia and China experienced record high temperatures in 2017.
• By the end of November, wildfire burn across the United States was at least 46% above the 10-year average. Chile had its most extensive wildfire ever.
• A record 29.7 million hectares of tree cover was lost in 2016—an area about the size of New Zealand. This loss was about 50 percent higher than 2015. Habitat loss increases the rate of biodiversity loss and species extinction.
• Emissions of CO2 rose for the first time in four years in 2017, bringing atmospheric concentrations of CO2 to 403 parts per million, compared with a preindustrial baseline of 280 parts per million.

When everyone has returned from their Swiss interlude, we hope that the clients of JP Morgan, Goldman Sachs, BlackRock and other institutional investors will ask tough questions about what they are doing to force emissions down at portfolio companies. The risk of business as usual is too high.

Emissions and Omissions: The Missing35 on Climate Action