The Climate Action 100+ is an admirable effort by institutional investors to step in where governments fear to tread. In the wake of the Paris Agreement, expectations were high that national governments would implement their promises under the Intended Nationally Determined Contributions agreed in Paris. However glaciers are melting, wildfires are spreading, and droughts are lengthening much faster than governments are acting.

Hence the Climate Action 100+, in which 225 investors agreed to turn up the heat, so to speak, on the 100 largest global emitters of greenhouse gases. In addition to requesting improved governance and disclosure around climate risk, investors will ask high emitters to reduce greenhouse gas emissions consistent with limiting average global warming to 2°C above pre-industrial levels.

Will it work? The 225 investors represent $26.3 trillion in assets. But an examination of the Willis Towers Watson list of the largest global asset managers shows only 15 of the 50 largest firms are participating in Climate Action 100+. Imagine the investor leverage if the missing 35 were on board?

The top 50 list includes 26 U.S.-headquartered firms. Of those only one, Northern Trust, is a Climate Action 100+ signatory. The following two charts show the proportion, by country, of asset managers in the top 50 who didn’t join Climate Action 100+ and those who did.

The non-signatories include The Vanguard Group and BlackRock, who together manage nearly $11 trillion. As Preventable Surprises’ Missing55% report documented, the two firms failed to support a single shareholder resolution requesting climate risk disclosure at US utilities. Utilities are the largest greenhouse gas emitters in the country. By not signing up to Climate Action 100+, they continue to signal to investee companies that engagements will be a private affair with no reporting out on commitments made and no accountability to shareholders.

Whilst the largest US asset managers are thin on the ground in Climate Action 100+, US asset owners are well-represented, particularly state and municipal pension funds. Likewise, major pension funds from around the globe are also on board. The severity of the risks faced by their future beneficiaries is clear to pension leaders. Whilst they have committed to engaging with the world’s largest emitters, they should also be talking to any asset manager they have hired who isn’t supportive of their agenda on climate. The Missing55% report shows how the top 10 utilities investors voted on 2°C scenario resolutions. The chart below shows whether the 30 largest asset managers, as measured by Investments & Pensions Europe, supported the three initiatives listed:

It shows a stark lack of involvement by US asset managers (and the five largest investment consultants). 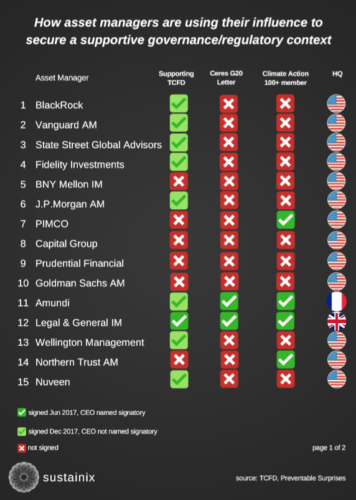 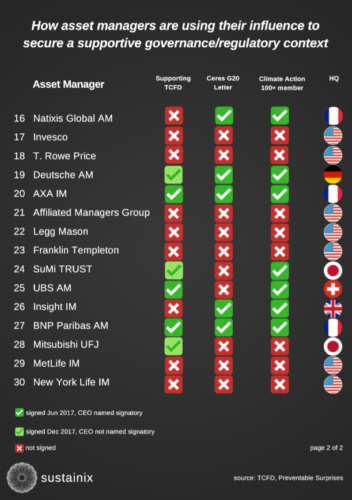 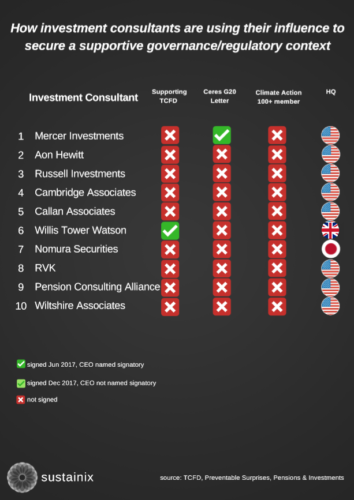 Signatories can still join Climate Action 100+. The sustainability of the financial system, and the planet, turns on whether investors are willing to be forceful stewards of client assets, which means working every angle in a system highly resistant to change.