If you had to quickly pick which is the most powerful–sovereign countries, asset owners, or the investment firms both hire to manage their assets–who would get your vote? If money is power–measured either by AUM or GDP–the chart below offers an interesting perspective. Excluding the two largest economies (the U.S. and China), the chart shows: 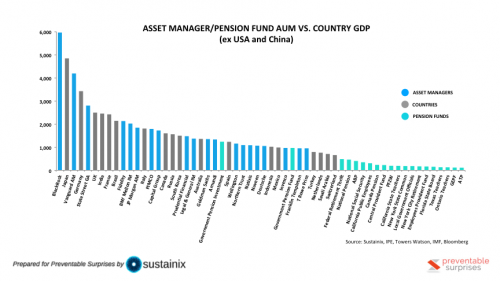 A forthcoming report from Preventable Surprises will show that the two largest asset managers shown here voted against every 2°C scenario resolution put forward by shareholders at U.S. utilities. Most of the pension funds shown–which are duty bound to serve the long-term interests of their future beneficiaries–worked hard to support these same resolutions.

Something is wrong with this picture. How can the desires of long-term investors for a 2°C-aligned economy be ignored by the investment firms voting proxies on their behalf?

Individual asset owners–large though they may be–have not been effective in influencing the firms hired to manage their funds. Asset owners must work together to magnify their voices and make it impossible for investment firms to ignore their wishes. As the Red Line Voting project is showing only greater collaboration between asset owners will shift the dial.

A coordinated effort would begin with private discussions with outside managers clarifying expectations. Ultimately, though, laggard fund managers need to be sacked and RFPs need to reflect a nonnegotiable demand for forceful stewardship.

Ways of Being in a Brutalist Environment

Frank Bold, a public interest law organisation with offices across Europe, is hosting a summit to focus on corporate governance and sustainability. Preventable Surprises CEO Raj Thamotheram will be among a panel...
Read full article

The latest convert to long-termism is… the U.S. Chamber of Commerce!

It’s wonderful to read that the U.S. Chamber of Commerce is forming a coalition to make sure “long-term value creation” drives the decisions of public company boards. What a...
Read full article