A Road to Damascus Moment

As AGM season approaches, so does the road to Damascus moment for asset managers that participated in the Task Force on Climate-related Financial Disclosure. They can honour the work of their task force—elevating climate change as a material risk that must be disclosed to investors. Or, they can continue deferring to boards that have resisted transparency around climate risk. Will they be supplicants to the status quo? Or will they have a Damascene conversion and become champions for the environment?

Opportunities to take a stand will be many, with multiple shareholder resolutions advancing a 2°C-aligned future. Preventable Surprises is focusing on resolutions at electric utilities—the low-hanging fruit of emissions reduction. These include AES, Ameren, Dominion Energy, Duke Energy, Kinder Morgan, First Energy, Southern Company, and PPL. We challenge TCFD members to eat their own cooking by supporting resolutions that accelerate utilities’ transition to a low-carbon footing. The alternative is to continue supporting a financial system that is incompatible with the Paris Agreement and, ultimately, a livable planet.

It is worth remembering that the genesis of the task force was to quantify the exposure of investors to growing climate risk, thereby learning from the mistakes of the global financial crisis. Recent Bank of England research sorted securities into three tiers: fossil fuels (blue in chart below), fossil-fuel dependent (pink), and low risk (green). It found 28% of global equities and 31% of global debt fall into the first two tiers (right axis), heightening the risk of market crashes as carbon assets become stranded. “Roughly 60% of public debt issued by oil and gas companies matures after 2020 and, thus, could be impacted by transition risks,” the researchers noted. 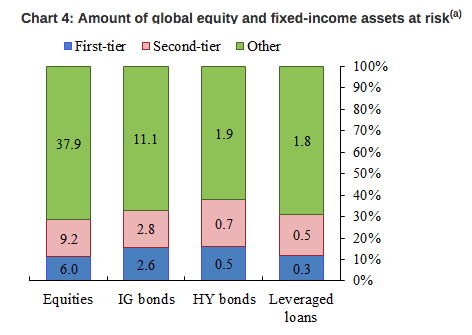 Source: Reuters, Datastream, Dealogic, Bloomberg and Bank of England calculations.
(a) Numbers on the bars show value of assets at risk, expressed in US$ trn. See BoE blog for full article.

Investment behemoth BlackRock, a TCFD member, has released a letter that appears to throw down a gauntlet to companies that do not embrace the TCFD’s recommendations. The letter states that it will support shareholder resolutions on climate if:

It further asserts BlackRock’s right to remove board members who have ignored climate risk. “Ultimately the board is responsible for protecting the long-term economic interests of shareholders and we may vote against the re-election of certain directors where we believe they have not fulfilled that duty, particularly in markets where shareholder proposals are not common,” the letter states.

Certainly there is wiggle room in these statements, but we hope BlackRock is well down the road to Damascus. We hope 2017 does not see a repeat of 2016’s Missing60 phenomenon, where nearly 100% of investors supported 2°C-aligned resolutions when management was on board (BP, Shell), but only 40% voted in favour when management opposed the resolutions (Exxon, Chevron). We interviewed some of the Missing60 and presented their argument that private engagement can be more effective than public votes, while we respectfully disagreed.

Here, for instance, is the explanation from The Vanguard Group for being one of the Missing60 voters: “After analyzing the issues underlying the (resolution), we have encouraged the company management to make specific improvements in how it assesses the severity of these risks, communicates to shareholders about the risks, and works with key stakeholder groups to improve practices.”

Now that Exxon’s CEO is in the cabinet and the Trump administration is doubling down on fossil fuels—emboldening carbon companies—it will be hard for institutional investors to maintain that private engagement has been effective. Conversion to climate champions is the only way for asset managers to protect the planet, their shareholders and their reputations.

Casey Aspin is Director of Communications for Preventable Surprises.