The many organisations working to force utilities to confront climate change risk scored a major victory this week, when 56.8% of shareholders at PPL Corp. voted in favour of a proposal demanding production of a 2°C scenario analysis. A Financial Stability Board task force said this tool is needed to understand the “strategic implications of climate-related risks and opportunities” and to provide  stakeholders with information about how the organisation is “positioning itself in light of these risks and opportunities.”

Six other 2°C resolutions have been voted on at utilities. None were approved, however the average vote in favour—45%—shows that utilities’ aggressive campaigns to persuade investors to vote “no” are enjoying limited success. The most important vote, at Southern Company, is a week away. The Southern resolution is the only one calling for transition planning, the most critical task facing utilities. Southern is the #2 largest emitter of greenhouse gases in the U.S., according to a 2016 study (page 26).
Investors in utilities should unite behind these resolutions to reduce risk in a sector exposed to rapid change and in a world undergoing climate change. In May 2016, the Financial Times reported that writedowns by European utilities had reached €104bn since the beginning of 2010. Falling prices for wholesale power (partly due to China’s pivot away from imported coal) and the rise of renewables caused massive devaluations of coal- and gas-fired power plants and multiple credit downgrades throughout the sector. Investors who are not forcefully and publicly engaging with utilities on climate risk are exposing their end beneficiaries to undue risk.

Ownership of these U.S. companies is concentrated among the world’s largest asset managers (see below). We won’t know how they voted until the SEC releases proxy votes in August. We are lobbying these asset managers — and asset owners that hire them — to vote in support of resolutions calling companies to assess their exposure to changes arising from a 2°C-aligned world. Here are five reasons why:

To fulfil their fiduciary responsibility to their clients, hired investment managers must be forceful stewards. They must publicly encourage investee companies to quickly transition to a low-carbon operating model. These investment firms can’t tout their own commitments to a low-carbon footprint and taking a long-term view while simultaneously casting proxies in favour of high emission BAU. Their values and their votes must align. 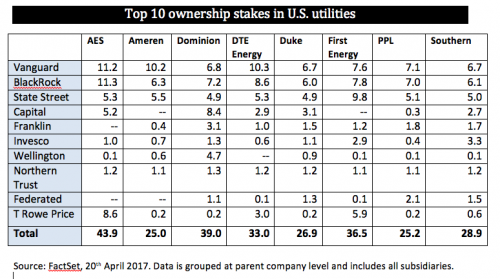