New research by the 50/50 Climate Project into voting on climate friendly resolutions highlights the disconnect between public positioning of the largest asset managers and their voting behaviour. Axios Generate, an energy focussed newsletter, created a visual summary: 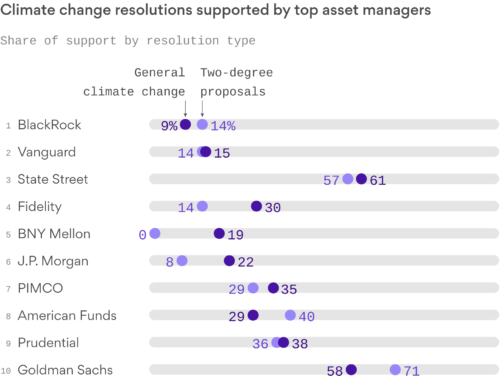 In a summary of its research, 50/50 Climate project stated:

“A very small number of the biggest asset managers had the ability to determine the outcome of almost all key climate-reporting proposals at energy and utility companies last year. If either of the top two asset managers, BlackRock and Vanguard, had voted yes on any of ten or eight key climate proposals, respectively, those proposals would have received a majority of support.”

Preventable Surprises’ own research on voting at nine utility company resolutions reached similar conclusions. Could the increased attention to the gap between words and deeds make a difference during this year’s AGM season? Time will tell.