Nearly half of the shareholders at Southern Company have a message for the Atlanta-based gas and electric utility company: Clean up your act! At Wednesday’s annual general meeting, 46% of shareholders voted in favour of a resolution requiring the company to disclose its business plan for transitioning to a low carbon economy. This despite heavy lobbying by Southern of its largest shareholders. The 2°C transition plan received 34% last year; the one-year jump in voter support is unusual for a shareholder-submitted resolution, showing the impatience of investors with Southern’s head-in-the-sand approach to emissions.

Last year, Southern’s three largest shareholders opposed the 2°C transition plan. Vanguard (6.7%), BlackRock (6.1%), and State Street (5%) together held 17.8% of the company’s shares in April, according to FactSet. However their voting power is much greater than this suggests. In last year’s vote, only 66% of Southern shares were voted (the rest were abstentions or shares held by nominees with no power to vote). When the three investment firms’ 17.8% position in Southern is recalculated based on the smaller pool of votes cast, their share rises to a whopping 26.8% (Vanguard 10.1%; BlackRock 9.2%, State Street 7.5%)–assuming the same number and percentage of shares voted this year. Company voting records will not be released until August; it will be interesting to see which of the big three realises the extent of portfolio risk presented by carbon-intensive companies like Southern.

Southern is the country’s second-largest emitter of greenhouse gases behind Duke Energy (see page 26). In 2015, Southern generated 46% of its power from natural gas and 33% from coal, making it one of the dirtiest utilities in America, according to the memorandum supporting the resolution. The Company’s 10K indicates that “the mix of fuel sources for generation of electricity is determined primarily by demand, the unit cost of fuel consumed, and the availability of generating units,” the memorandum states–pointedly ignoring consideration of emissions. The resolution and supporting memorandum were filed by the Sisters of St. Dominic and eight co-filers.

If the largest institutional investors voted against today’s 2C transition planning resolution, they will be disregarding:

The chart below shows how less-demanding resolutions have fared so far this year. These resolutions ask only for disclosure of risks arising from climate change, not production of a transition plan addressing risks and opportunities, as voted on at Southern.

The resolution requests that Southern:

“disclose its business plan for achieving a competitive return on capital and addressing the opportunities of transitioning to a low-carbon economy while providing safe, reliable, and affordable energy. The requested report would include goals for reducing emissions, plans to integrate technological, regulatory, and business model innovations; and alignment of incentives, research and development, and public policy positions with this strategy.”

Southern could have done all of these things after last year’s vote. It has continued to side with BAU in an industry that is undergoing rapid change due to the uptake of renewable energy, the increased dispersion of energy production and distribution, and increased state regulation. The 56% of investors voting against transition planning are exposing their end beneficiaries to undue risk as coal-fired generation plants become stranded assets. If you control assets owned by any of the managers listed below, ask them if they have been a forceful steward, protecting your assets from climate-related risk, or if they sided with management to resist the utility transition that is underway. To learn more about transition planning within the sector, please read our guidance for investors and utility managers. 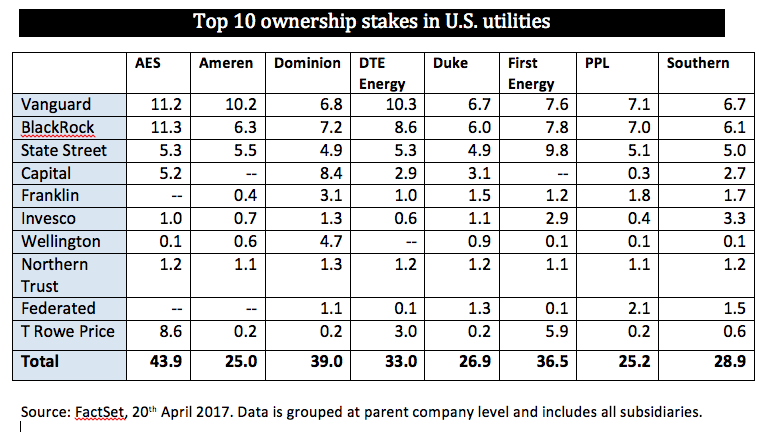